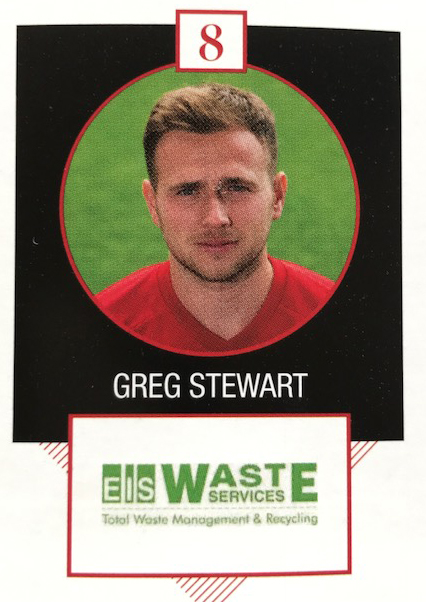 Greg began his footballing career at Rangers’ Academy until he was 13, and then played for Hearts before his release. He then trained with Falkirk and Stirling Albion for almost a year, before joining Syngenta Amateurs FC in 2007.

In July 2010 Stewart signed with Cowdenbeath of the Scottish First Division. He made his 1st division debut on 7 August, in a 2–0 home loss against Ross County. On 6 November, he scored his first professional goal. He finished the season as the club’s top scorer, with nine goals.

On 7 April 2014, it was confirmed that Stewart had signed a pre-contract agreement with Dundee and would join the club when his Cowdenbeath contract expired. He scored on his debut as Dundee beat Peterhead 4–0 in the first round of the Scottish League Cup on 2 August 2014. In January 2015, he signed a new contract until 2017. Stewart was named as SPFL Player of the Month for January 2015, after scoring five goals in seven matches during the month. He was named as one of four players on the shortlist for the 2014–15 PFA Scotland Players’ Player of the Year award, and was nominated for a second consecutive season in April 2016.

Having rejected an extension, Stewart began the last year of his Dundee contract with six goals in three League Cup matches, amid rumours linking him with a move to other SPFL clubs or to the English Championship. On 12 August, he signed a three-year contract with Birmingham City; the fee was officially undisclosed, but reported by the Dundee Evening Telegraph as an initial £500,000, potentially rising to more than £1 million. Stewart made his debut as a late substitute in a 1–1 draw with Wigan Athletic on 16 August, and continued off the bench until making what the Birmingham Mail dubbed a deserved first start in an unusually attacking line-up at home to Preston North End. His team came back from 2–0 down to draw, and Stewart’s own performance was ineffective. He had a run of four starts in December, after Gianfranco Zola had replaced Gary Rowett as manager, but ended the season as a fringe player, with 21 league appearances, of which 6 were in the starting eleven, without scoring.

All at EIS Waste Services wish Greg all the best for the coming Season.